Modifiers are collections of small individual tasks that manipulate data. A Modifier must be connected to a Process Step.

There has to be at least one Step to create a Modifier. A Step is a collection of Modifiers that will be run at the same time. If there are more Steps, the Modifiers that are in a particular Step will not be run until all active Modifiers in all preceding Steps finish with the SUCCESS Status.

To create a Step click the Add new step button on the right side of the list of steps in the Progress details section.

This will open a popup where you need to provide a name for the new Step.

The name must be unique for the current Process 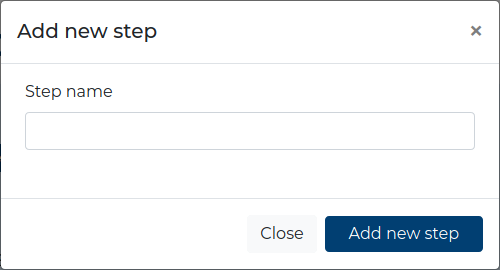 Each Modifier can have one of the following Statuses:

To import a Modifier go to the Process details section and click the Import modifier button.

This will navigate you to the Import Modifier section where you need to provide:

After clicking the Save button, you will return to the Process details section with the imported Modifier in the chosen step.

After clicking the Cancel button, you will return to the Process details section, without importing any Modifiers.

Every time you run a Modifier or a Process, the Modifier Status is saved to a log entry.